Shigeru Horii, a Professor at the Nagamori Institute of Actuators specializing in materials science, has received the Best Presentation Award from the Cryogenics and Superconductivity Society of Japan (CSSJ). Professor Horii was presented with the award on May 29 at the Spring Meeting of the CSSJ held in Tsukuba, Japan. The award celebrates the achievements described in his paper, “Three-dimensional crystal orientation in RE123 powders by a linear-driven modulated rotating magnetic field”, presented at the CSSJ meeting in 2018. Among 159 papers considered during a rigorous screening process, his was one of only ten papers selected to be honored with the award.

Aligning the crystals within a poly-crystalline substance gives the resulting material characteristics similar to a large, single crystal. Recently it has been found that a modulated rotating magnetic field (MRF), a magnetic field containing both static and rotating components, enables three-dimensional alignment of magnetically anisotropic crystals (whose magnetic characteristics differ according to their orientation). Applying this method to material production is challenging, partly because of the difficulty of incorporating the MRF into a continuous manufacturing process. Professor Horii and his colleagues solved this problem by developing a linear-drive MRF generator, enabling the continuous production of linear materials in sheets that have anisotropic characteristics similar to those of a single crystal. Moreover, in a proof-of-concept experiment, they were able to obtain three-dimensional alignment within a superconducting ceramic powder.

It is expected that their technique will be incorporated into production processes for anisotropic functional materials, such as superconducting wires and composites containing well-aligned fillers.

Professor Horii plans to continue his research activities in the Faculty of Engineering at Kyoto University of Advanced Science, which is being applied to open in 2020.

​Sajid Nisar, Junior Associate Professor of Robotics at the Nagamori Institute of Actuators, has received the 2019 Young Award. Professor Nisar received the award on May 20 at the International Conference on Robotics and Automation (ICRA) held in Montreal, Canada. 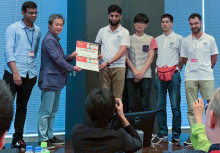