In our ongoing series showcasing some of the fascinating research our professors are working on, we move now to the field of control engineering. Looking at two applications, one being swarm robotics and the other electric motors, we will introduce some of the work by our esteemed faculty, Dr. Fukushima and Dr. Kucuk.

Opening up new frontiers through advancements in swarm robotics

Scientists have been fascinated by swarm behavior for decades, though it originated in the natural world. More recently, there has been a growing trend to adapt these patterns to machines, especially in robotics. KUAS’ Hiroaki Fukushima has made swarm robotics his major field of research. He is aiming for his research to contribute to major societal applications across various fields. 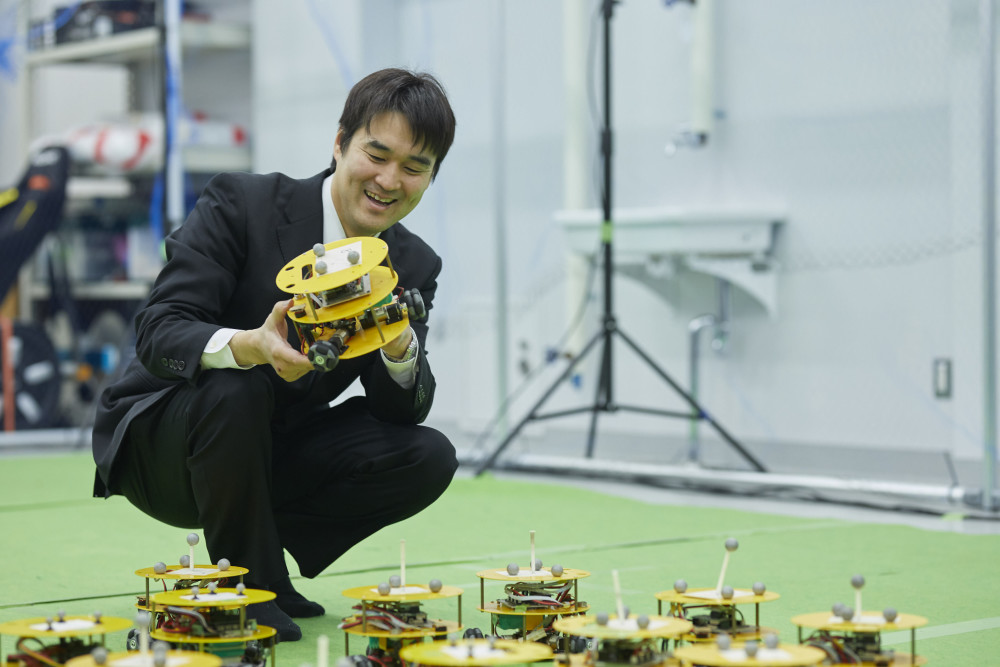 The reason why this field has been garnering attention is that recent advancements in technology have completely transformed what a swarm of robots is able to accomplish. The trend is from centralization to decentralization. In the past, a swarm had to assembled into a certain position before individual robots could be controlled manually by an operator. This approach faced numerous limitations, both on the control (i.e. human) side as well as the need for long-ranging wireless signals. However, research such as the one being undertaken by Dr. Fukushima has led to robots being able to operate individually, while still maintaining the objective of the swarm as a whole. The advancements in sensors and AI allow for individual robots to move independently through detecting their environments and any obstacles in them, all the while communicating with the entire swarm. Furthermore, they are increasingly able to adapt to local environments, meaning that there is less need for global information. This has also lead to breakthroughs in two major areas that hindered broader applications for robot swarms: fault tolerance and scalability.

This flexibility leads to a dramatic increase in potential applications. One immediate practical application that comes to mind is transportation, which can range from industrial applications (e.g. in factories) to the provision of medical supplies in a disaster area. Indeed, the extreme environments are where the field of swarm robotics has the greatest potential. In other words, if robot swarms can operate in such environments, they will reduce human risk and save lives. Applications here can include the aforementioned transportation, but also demining, search and rescue, sensing (e.g. of vital signs) as well as cleaning up toxic spills. The ability to traverse areas filled with obstacles, such as war zones or disaster areas, or extreme environments such as in outer space or deep-sea, underlines their flexibility. It also emphasizes the need for the aforementioned fault-tolerant approach, as the robots themselves will also be put to risk. To come up with solutions for these applications, which take place in inherently unstable and unpredictable environments, is exactly what Dr. Fukushima is working on as he continues his research. Without a doubt, swarm robotics is another field of engineering with profound real-world potential.

The future will be shaped by electric motors

When thinking about power generation, many people will immediately think of the motor. We all know that a motor is the primary components that makes a car move through the internal combustion engine. However, motors have so many other applications: in the example of the car alone, there are at least an additional 80 more motors. Indeed, electric motors already make up more than 30% of our total energy consumption, and this percentage will increase even further. KUAS’ Fuat Kucuk specializes in the field of motors and knows how crucially important they may be in solving many of our energy issues. 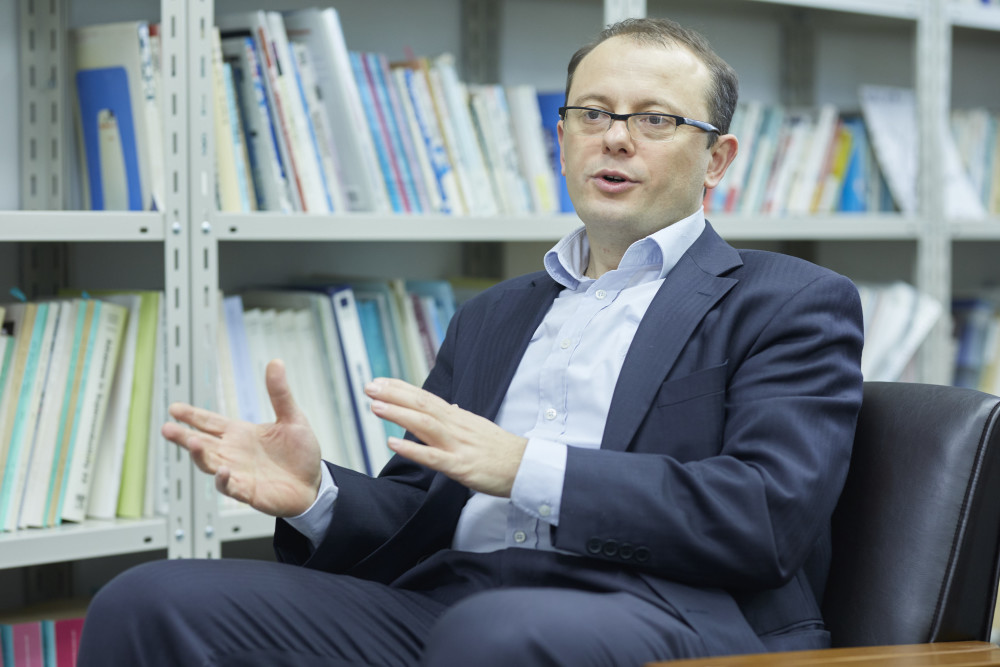 Coming from a background of control engineering, Dr. Kucuk primary research interest is in getting the highest efficiency out of electric motors. Specifically, he is looking at the control and design of motors, as well as the ever-important magnet. Inside a motor, the magnet plays a significant role in the increase or decrease of motor performance as a whole. Today, electric motors are in almost every device and appliance around us, meaning that achieving even a small uptick in efficiency can result in a significant reduction in energy consumption. One of the most popular research fields currently is electric vehicles (EVs). In EVs, one of the major challenges in improving their commercial viability is the need to decrease the price of the motor, far and away their most expensive part. Here, Dr. Kucuk is looking at alternatives to the neodymium magnets, which are the most widely used magnets for this application in the world. However, these magnets are primarily concentrated in the Chinese market. This makes it difficult and costly to import for other countries primarily producing EVs.

Dr. Kucuk wants to take this research even further: the field of electric motors is more than 100 years old now, and has seen rapid improvements such as the emergence of power electronics and semiconductors. However, he feels that it has only begun to truly emerge as the primary field in energy. Simply taking the current numbers, when electric motors account for more than 30% of the world’s energy consumption, achieving even a 1% increase in efficiency leads to profound environmental benefits, including for instance the broad-ranging stoppage of building new power plants.

To show some of the exciting ways engineering in general, and our esteemed faculty specifically, contribute to our society, we sat down with Dr. Kazuo Oki, a specialist in measurement and recently researching drone measurement, as well as Dr. Liang Zilu, who is researching the exciting field of wearables.

[Professor Spotlight] An eye for the bigger picture - the kind of engineers KUAS wants to bring up (Osamu Tabata, Dean of KUAS’ Engineering Department)

This is what Dr. Osamu Tabata, Dean of the Kyoto University of Advanced Science’s (KUAS) Engineering Department, talks about his vision for the innovative department, stressing the importance of a practical, solution-oriented mindset together with playful creativity. 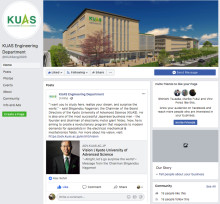